Torwood Castle, Scotland - A Look Inside (March, 2017)
Many thanks to John Welsh for his excellent work on this video!

The following video is important for a couple of reasons. Firstly, it presents an unprecedented walk-through of the remains of Torwood Castle as it stands today. The castle is over 450 years old and is a rich part of Forrester family history. Undoubtedly, many grand stories resonate through its forlorn walls. Secondly, this unedited video shows the regrettable conditions of an ancient historical monument and landmark. From the profanity painted on the walls to the refuse littered through its lower level, Torwood Castle begs to be helped and delivered from its eventual demise. It is of paramount importance to our posterity and cultural significance, which will be recorded in the annals of Scottish history, that something be done to preserve and restore the remnants of our rich heritage. With enough interest and desire to see change, Torwood Castle may be resurrected back to its former glory. It is time to begin this endeavor now, while we still can... 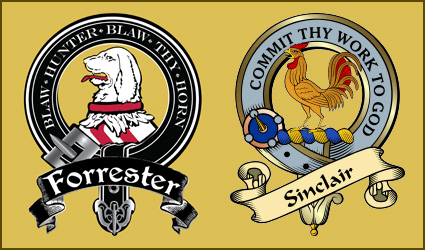 Next generation sequencing and Y Full analysis of BAM has revealed an interesting development. The Sinclair Herdmanston lineage and our basal subclades Forresters are genetically related. Both groups are L11+ while being negative for downstream subclades U106 or P312. The relation is recent in terms of genetics.

ISOGG has not assigned position of this relation on the 2017 haplogroup R phylogenetic tree. Y Full experimental tree v5.01 has identified 17 positions of acceptable quality for pass as matching for Sinclair / Forrester. This cluster has been identified by Y Full as A8062. Contained in this cluster is A8055 which is the current Sinclair designation in FTDNA basal subclades project. Examination of remaining Forrester SNP positions reveals 4 SNP's of acceptable quality which will be downstream of the A8062 cluster. This cluster has been identified as BY11673 by FTDNA.

Clan Forrester extends our thanks to Steve St. Clair, and Craig Sinclair, for their work and contributions to this research. Steve has granted permission for link to the Herdmanston Lineage for those who wish to know more. 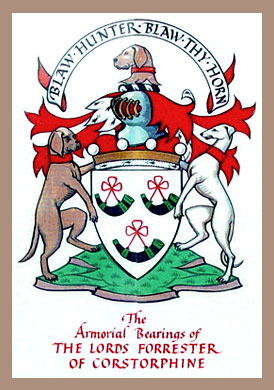 Arms of Sir Archibald Forrester according to Nesbit

The arms of the Lords Forrester have never been recorded with Lord Lyon King of Arms. This could be due to the fact Sir George Forrester, the 10th Lord Forrester and the 1st Lord Forrester under the new patent died prior to 1672 when register of arms became mandatory. The Foreman [Lyon Office] gives the supporters of Sir Archibald's arms [1482] as a beagle on the dexter side and a greyhound on the sinister. Hence the iconic image of the Lords Forrester.

In this serious time of unrest in our nation, it is wise to remember that the Great Creator is in charge and cares for all, no matter the color, race, creed, or circumstances.